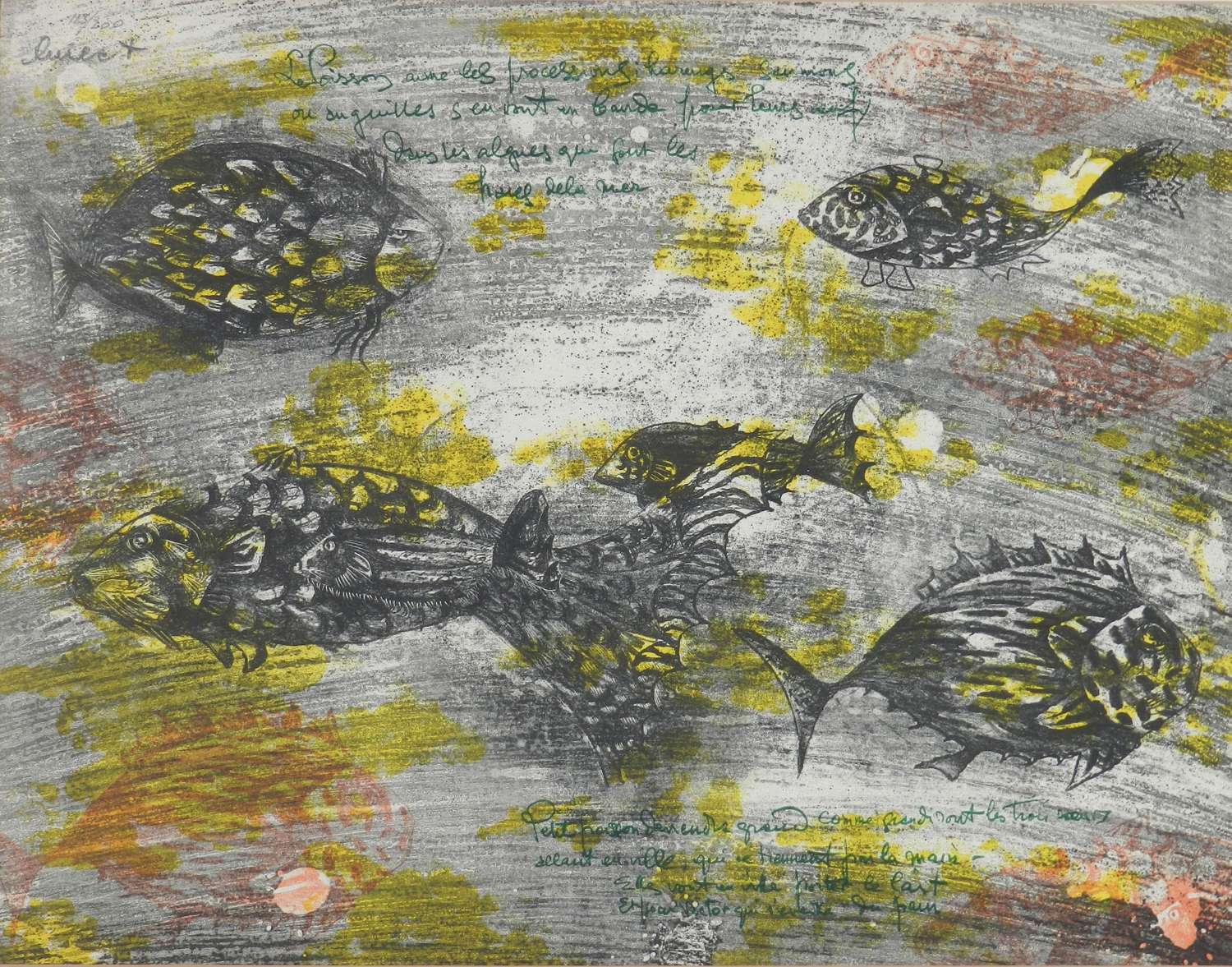 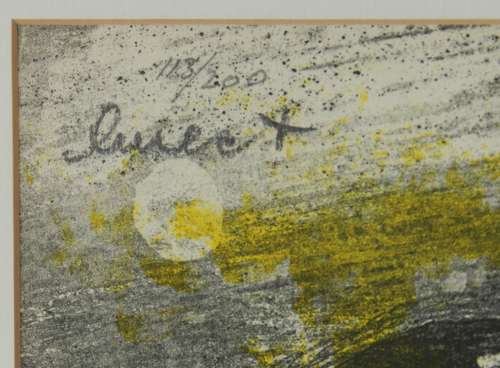 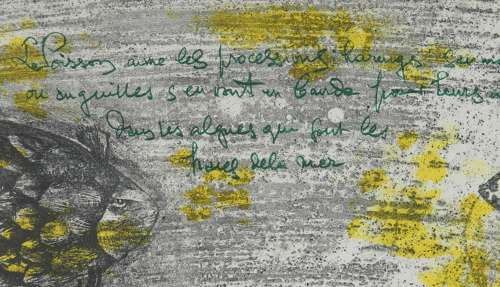 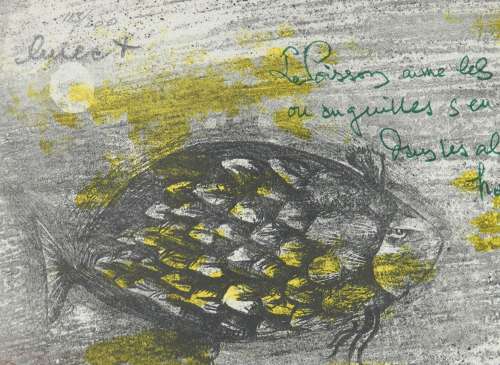 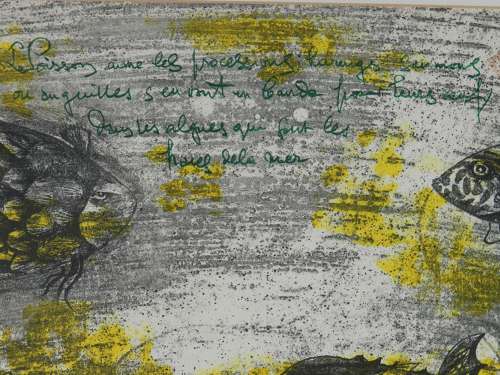 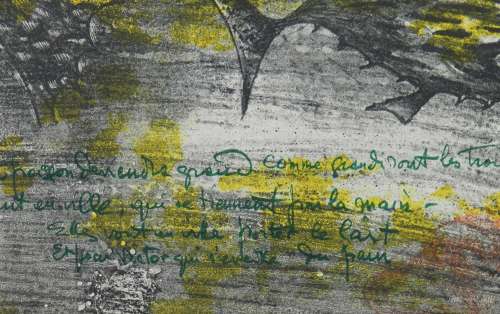 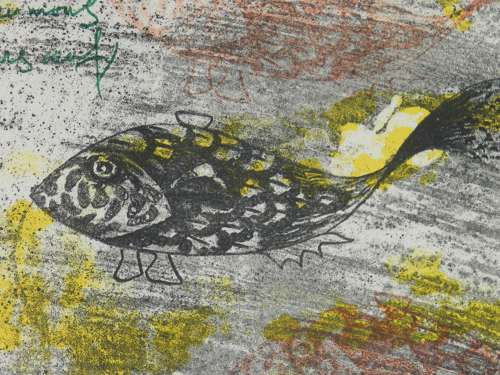 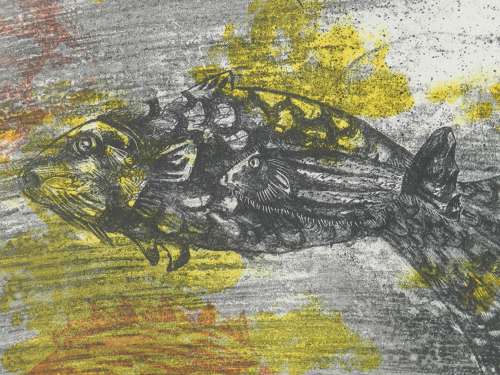 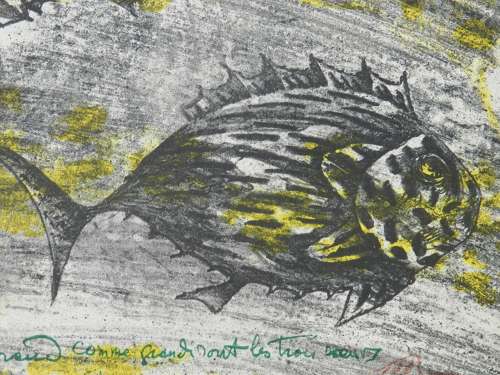 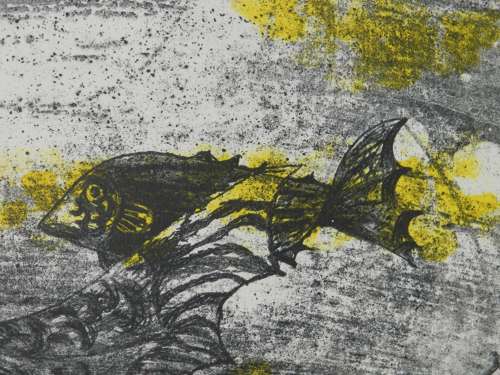 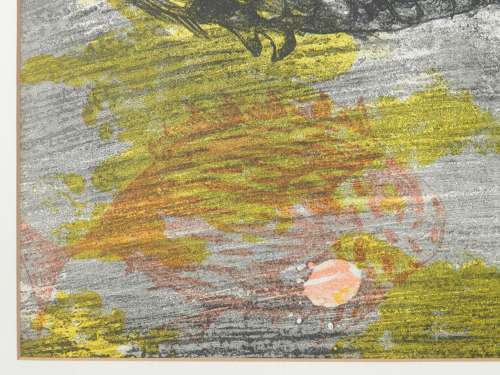 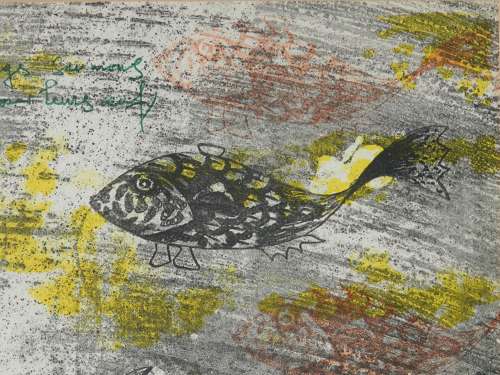 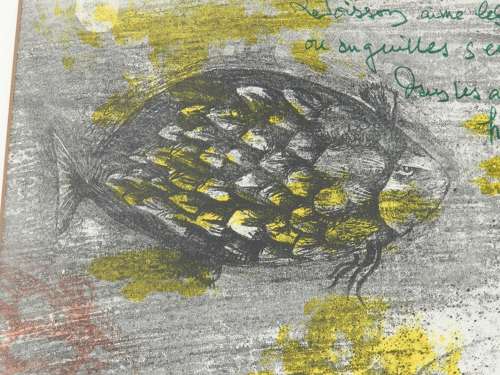 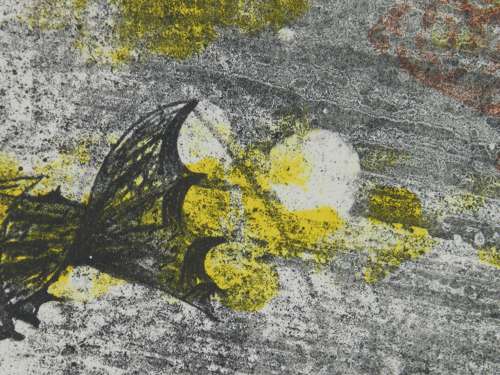 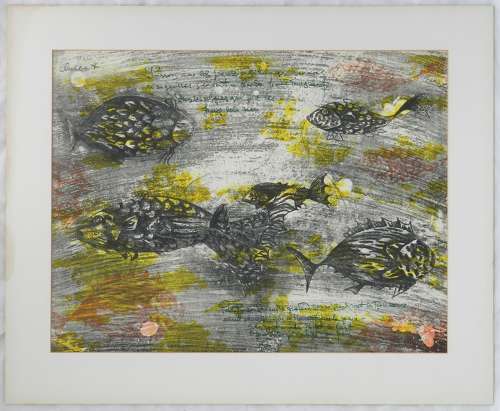 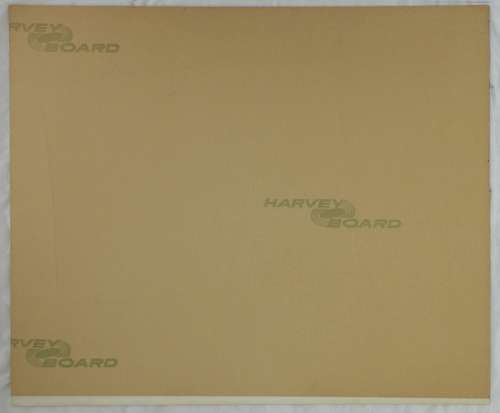 Jean Lurcat Lithograph Fish with Verse c1950
Signed in the frame with it's number
It is No 123 out of 200
Total measure 51cm (20 ins) x 61cm (24 ins)
The frame will be included without the glass for shipping
Lurcat 1892-1966
As a young man Jean Lurçat studied at the Académie Colarossi in Paris and worked in the studio of the engraver, Bernard Naudin. He met painters such as Matisse, Cézanne, Renoir; his friends included Rainer Maria Rilke, Antoine Bourdelle, and Elie Faure. Lurçat and three associates founded the Feuilles de Mai (The leaves of May), a journal of art in which these artists and writers participated. He then became an apprentice of the painter Jean-Paul Lafitte with whom he had an exhibition at La faculté des Sciences de Marseille.
In 1921, Jean Lurçat met Louis Marcoussis, created decoration and costumes for Le Spectacle de la Compagnie Pitoeff.
He participated in several expositions with Raoul Dufy, Marcoussis, Laglenne and others. He created tapestries and paintings for Le Vertige, a film by Marcel l'Herbier. In 1926, he exhibited in Paris and Brussels, and participated in collective exhibitions in Vienna, Paris, and Anvers.
Examples of his tapestries can be found in the Musée national d'art moderne (National museum of modern art). In 1930 he had exhibitions in Paris, London, New York, and Chicago. He created nine drypoint illustrations for Les Limbes (The limbo) by Charles-Albert Cingria.
In December, 1932, Lurçat participated in the exhibition Sélections with Matisse, Picasso, Braque, Derain and Raoul Dufy. The event was organised in New York by the Valentine Gallery. He created the decoration and the costumes for the Jardin Public (Public garden), a ballet by George Balanchine. 1933 also saw his first tapestry sewn at Aubusson, following the new and revolutionary technique that he developed.
In 1934, Lurçat returned to New York where he participated in the creation of new decoration and costumes for a choreography of Balanchine, which he unveiled in Chicago and Philadelphia. Then he returned to Paris and Vevey for the summer. At summer's end, he departed for Moscow, where he had an exhibition at the Musée Occidental (Western Museum) and at the museum of Kiev. In 1935, he painted the Dynamiteros in Spain; with inspiration from the revolution and the War of Spain. In Paris, he participated in the activities of the Association of the revolutionary authors and artists.
In 1936, Jean Lurçat was inspired when he saw the tapestry L'Apocalypse (The Apocalypse), which was woven in the 14th century. In 1939, he exhibited in New York and in Paris. In September, he took up residence in Aubusson with Gromaire and Dubreuil. His innovative technique used a simplified palette and robust weaving at broad point. In 1940, he collaborated with André Derain and Raoul Dufy. In 1941 he created his fifth tapestry, Le Cirque (the circus), for Mme. Cuttoli.