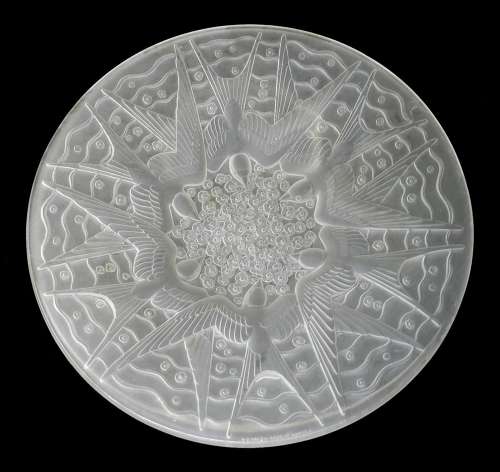 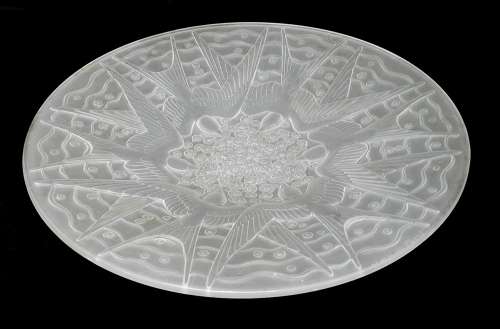 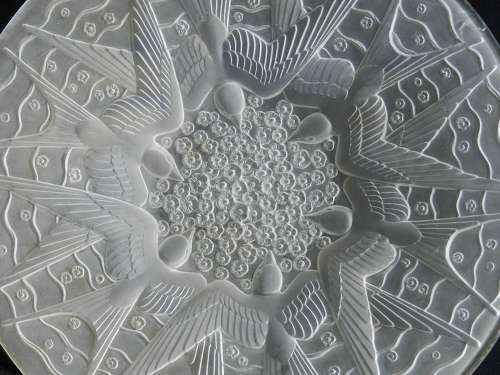 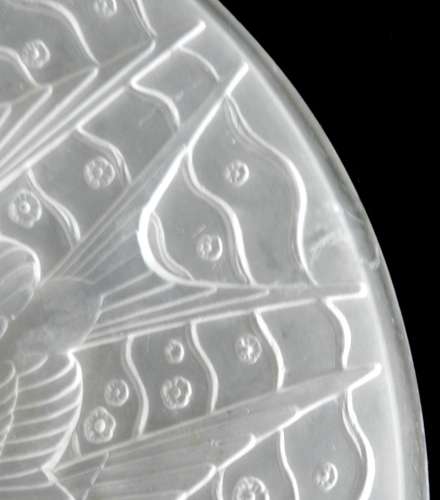 Pierre D'Avesn opalescent glass center bowl swallows French D'Avesn was a former student and designer for Rene Lalique
This piece is an exceptional (and stunning) example of his work Hirondelles (Swallows) a Classic bird emblem of the era signed P d'Avesn Made in France
Centerpiece in very good condition with only very minor surface marks to the glass, and one on the edge not major or distracting, as shown which could be removed
Pierre D'Avesn began his career in the illustrious studios of Rene Lalique at the age of 11. Throughout his seventy plus year career, he worked and designed for practically every renowned glass studio in France, including Daum, Sevres and Croisy-Le-Roi, producing many of the most exquisite glass products of the period.
Pierre Gire, aka Pierre D'Avesn, was born in 1901. At the age of 11 he started work with Rene Lalique and stayed there for 10 years. During this period, he designed Lalique's famous "Serpent" vase as well as the "Tourbillons" vase, two of the most highly priced and extremely collectable pieces by "Lalique". In 1926, he left René Lalique and created his own models. His pieces were made by the Cristallerie de Saint-Rémy. In 1930, Daum Freres asked him to take the artistic direction of their molded glass department in their glassworks in Croismare and Lorrain. Which he did until the famous strikes in 1936. In 1937, he took over the management of Verlys until 1940. From 1940 he worked on his own and his pieces were made by Cristallerie de Choisy-le-Roi (Sèvres). He is one of the most important French glass designers for molded glass Art pieces along with René Lalique and Sabino.
These pieces made by Pierre D'Avesn are increasingly sought after because of the quality of his design and manufacture.